As published here in the Arbuturian.

At Costa Navarino, smell informs the time of day. In the morning the gentle breeze carries the scent of the cinnamon that dusts the breakfast pastries. Walking back to my room, the herb gardens and flowers flanking the paths offer snippets of the plants indigenous to the area; wafts of jasmine, lavender, green ginger, myrtle, wild strawberry and basil all dance in turn through the air around me. At the beach, the salty spray mingles with the appetising aroma of the seabass, aubergines and courgettes on the grill at the Barbouni Restaurant. As the day bleeds into night, the sugary smell of locals cooking sesame seeds in olive oil, honey and lemon juice to make the regional snack pasteli for guests rouses my appetite.

Before all of these tantalising glimpses of culinary Greece made themselves known to me, I was greeted by the heat of the Southwestern Pelponnese during early autumn. On stepping from the plane at Kalamata airport, the rush of warm air told me, as that particular blend of salty, caressing breeze always does, that I was now unequivocally on holiday. The scenery rushing past my eyes on the hour-long transfer confirmed it – golden hills, scattered olive trees and blue skies as far as my eyes could see. Yes, I was most decidedly in Greece. 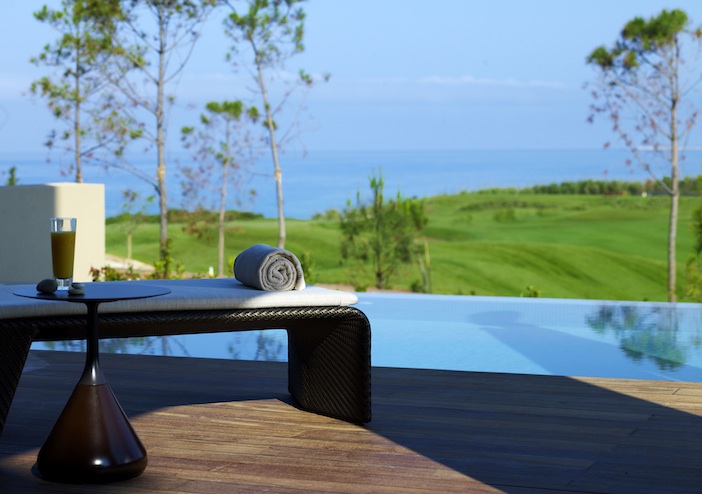 Thanks to the profusion of scents and sights with which I was welcomed at The Westin Resort , I was alive with anticipation before the first morsel of food materialised before me: the herb gardens, panoply of on-site restaurants and sizeable room (complete with private pool overlooking the Ionian Sea, a freestanding bath in the bedroom and two bathrooms at my disposal), all heralded good things. They did not renege on their promises: Costa Navarino is an authentic, delicious, unabashed and immaculately executed celebration of Messinia.

At the heart of the mission is food. Whether simply eating the regional cuisine, trying out one of the restaurants in nearby Pylos (in a departure from usual hotel practice, Costa Navarino actively encourages this) or really getting involved in the harvesting and cooking process, they are determined that no guest leave unacquainted with the charms of eating local dishes. ”We want our patrons to know that they’re not simply eating generic Greek cuisine but are also partaking in the local food rituals,’ hotel representative Ilia Gavrielatou told me.

Fortunately for the two five star hotels (The Romanos – romantic, boutiquey – and The Westin Resort – larger, less candlelight, fewer panoramic views) that make up Costa Navarino, the Southwestern Pelponnese is rich with culinary traditions from the cooking of the aforementioned pasteli – which were eaten by ancient Messinians for energy – to the liberal use of olive oil, which has been enjoyed by locals since the Mycenaean period. 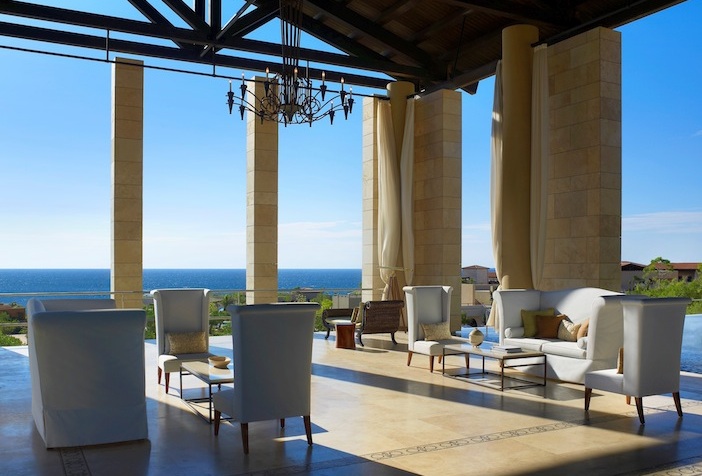 Tired and delighted to simply be at such a destination, my first day was spent mostly partaking in the eating side of things. I devoured a rather large meal at the Flame restaurant (on the menu: maniatiki salad – a mix of barley rusks, orange, cheese and cured pork from the Mani peninsula – and grilled talagani cheese), before promptly decamping to my terrace to fall asleep to the susurrous sounds of the sea. Later, at the Taverna restaurant, I gobbled as many of the 265 recipes that the restaurant had collected from locals as possible, all washed down with Costa Navarino’s wine, then retired once more for a restorative sleep.

The next day I awoke revived and all enthusiasm for the coming discovery of the area’s history. First up was an introduction to Greek philosophy among the olive trees. Hosted by Dr. Volonaki, a lecturer at the University of Peloponnese, our group were posed a simple question: how important is exercise in shaping the mind? Following my day of sloth, I was all too glad that as the group opinion rapidly affirmed the value of movement in developing cognitive function, we started to do just that; namely, we took a walk around the grounds. Ears on the conversation, eyes raking the impressive undulating scenery comprising hundred-year-old olive trees and the 18-hole golf course, the meander back to the hotel remains emblazoned on my mind as a high point of my visit. 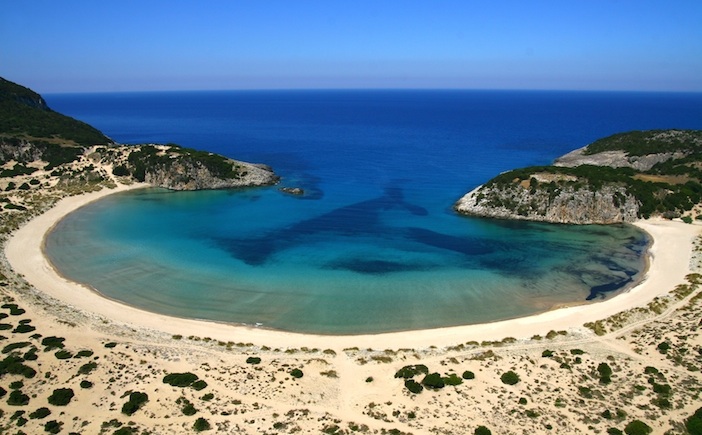 Once the heat of the midday sun had subsided and normal activity could once again resume, we took a tour of the local town of Pylos. Outwardly, Pylos appeared to merely be a sleepy port town, but Ilia was keen to point out the noteworthy spots. Its famous Voidokilia beach, for example, has repeatedly been voted one of the best in the world (it is, rather fittingly, shaped like an omega and is referred to as such by locals). Up close it is every inch as breathtaking as expected – so very blue, so very much sand. Very pleasing indeed.

Nearby Niokastro castle – built by the Turks in 1573, given over to the Venetians in 1686, occupied by the Italians and then serving as German headquarters during the Second World War – today provides the ideal vantage point from which to see Navarino Bay. The site of the seminal Battle of Navarino – which proved to be the turning point in the Greek War of Independence – stretches out below the castle, offering a view of each of the islands upon which monuments to commemorate the dead allies in the 1827 battle stand.

Later that evening in a small house in Pylos, it was back to food – this time, cooking it. Yes, I was charged with a rolling pin and told to make some spicy dough wafer-thin by Ulya, who regularly hosts Costa Navarino’s guests in her cooking workshop. As I rolled, the tantalising wafts of cinnamon and tomato clouded my mind and I therefore can’t be held accountable for the sheer volume of lies I told when asked about British eating habits so as not to upset her while in the midst of tutoring me in making the feast (‘’yes, I cook thrice daily with ingredients from my garden. Fresh, seasonal – that’s how we Brits like it’’). 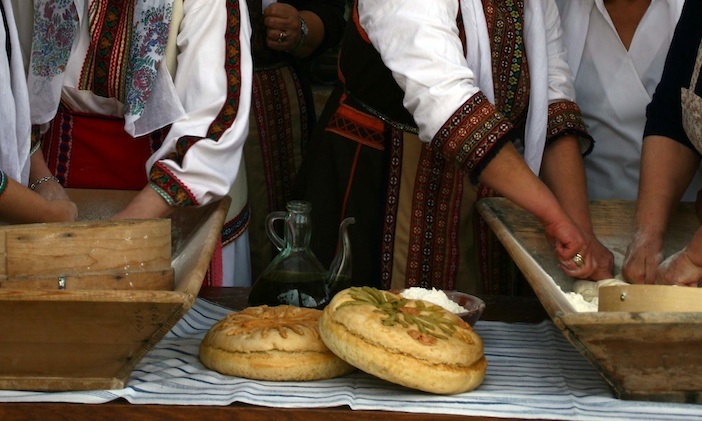 My industry was well rewarded – the spicy pasta followed by the regional milk pie proved delicious and Ulya remained untroubled by the poor eating habits of we hurried, sun-starved British. As we stood to leave, Ulya made it abundantly clear that though our meals were complete, the evening was not. In time-honoured fashion, we were to partake in a little Greek dancing. A word to the shy: imbibe a healthy amount of the 1827 Costa Navarino wine while eating. Fortified by said wine, I found myself swirling in the centre of the group when my time came rather happily – perhaps a little too happily, given my disinclination to get out of bed the following morning.

The difficulty in rousing myself was entirely worth the effort; on my final day I was to help in the process of harvesting Costa Navarino’s koroneiki olives. Stood in the bright sunlit groves armed with a plastic fork, I started to to hit ripe olives off the trees. The process involves a degree of effort and a little nous (don’t beat branches, beat twigs and whatever you do, do not pick unripe sections of the trees) and the fruits of the labour are remarkably bitter – ‘’you can’t eat these ones’’, I was told with a laugh as I remarked at the bitter taste, ‘’they’re only for making olive oil!’’ 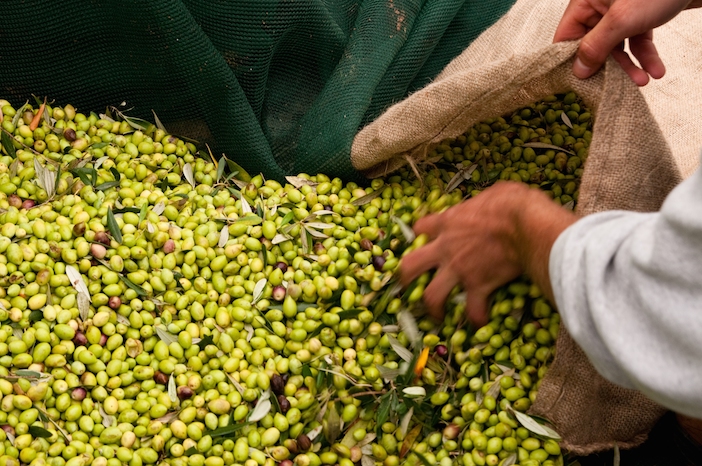 Ah, the olive oil. I must pause in my narration for a minute to simply offer a paean to the joy of the pale green, thick oil produced by Costa Navarino. It is unsurprisingly considered to be among the very best by those in the know. One such olive oil cognoscenti, Cristina Stribacu, offered wisdom during an olive oil tasting on the factors that differentiate the good from the bad: ‘’you must taste the greenery in your oil – it should have an aroma of fresh grass with notes of avocado or banana. It must also be balanced and equally as pungent on the tongue as it is bitter in the throat.’’

On the plane back to London, I noticed some pasteli in the duty free brochure. My curiosity piqued, I bought a packet. A nibble provided me with proof positive of Costa Navarino’s supremacy; the plane pasteli was overly-sugary and devoid of the lemony top notes. I threw it straight in the bin and on landing took a detour to Harrods, where a Navarino Icons range is stocked. My purchases may not transform my supermarket salad into a magnificent maniatiki, but a taste of Messinia every now and then will have to see me, and my uninspiring salads, through the winter.